Here are a few tips on blowing to help you get started with your new shakuhachi.

Keep all the holes open at first. It will be much easier to produce a sound this way and will allow you to concentrate on holding the shakuhachi in the proper position. In this regard, posture is important. Sit or stand up straight so your breathing is not constricted. Keep the spine erect, but relaxed. In other words, don't slouch. Once you succeed in producing a tone, work your way down the scale closing the back hole first.

It is not necessary to blow very hard. A steady stream of air works better than a strong blast. Rest the flute on your chin and experiment with the angle at which it is held. You are trying to split the air column coming from your lips across the blowing edge, so aiming is important. The hole produced by your lips should be slightly elliptical (oval) rather than round. To achieve this, don't pucker as if you are kissing, but stretch the upper lip ever so much. In other words, smile when you play the shakuhachi. (Smile when you aren't playing the shakuhachi. (<") Sometimes playing in front of a mirror helps. Long moustaches do not. 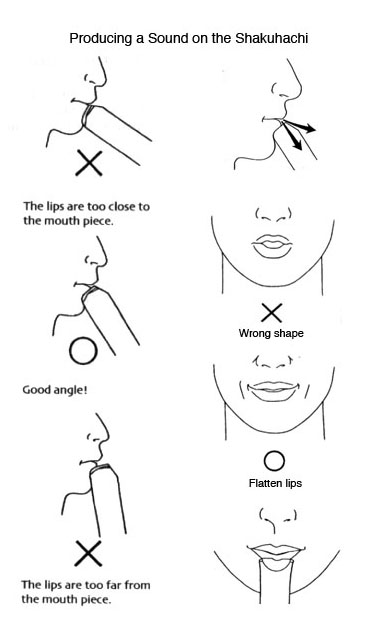 This short video excerpt from Bruce Huebner's Shakuhachi for Beginners DVD shows you how to do it. 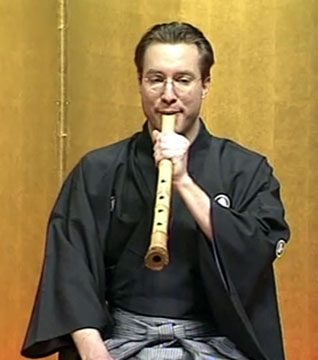 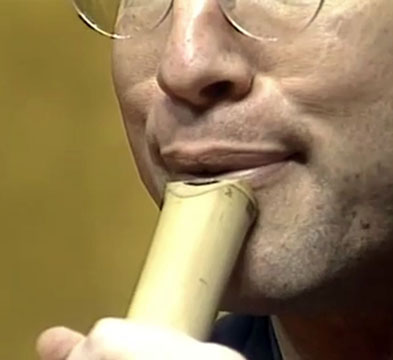 Once you are able to play all the notes, try to extend and control the envelope of sound. Don't forget to breathe, i.e. take a deep breath rather than short, shallow pants. Breathing "high" from the lung is what we do when frightened or stressed and is designed to get as much oxygen into the bloodstream as quickly as possible. This may result in dizziness. Breathe deep and "low" from your diaphragm and you will avoid this problem.

It is important to know when to take a break. If you become frustrated, put the flute down and come back to it later. Your shakuhachi will be patiently waiting for you to return.

Producing a sound on the shakuhachi is a bit like learning to ride a bike. Once you get it (and you will), you are off on an incredible journey!

If you are interested in a teacher to help you learn the basics, I highly recommend on-line instruction offered by Patrick Johnson. If you purchased a Student, Advanced Student or Professional model instrument from Tai Hei Shakuhachi, you qualify for a free one-hour introductory lesson. I urge you to take advantage of Patrick's expertise, as it will start you off in the right direction.

Patrick Johnson has studied shakuhachi for more than 25 years, including an extensive repertoire of Japanese folk songs, popular pieces, and particularly Koten Honkyoku, the meditation music that has been associated with Japanese Zen temples for centuries. He is the founder and chief instructor of the Seattle Shakuhachi Study Group, a flute dojo that has its headquarters in the Wallingford neighborhood of Seattle. The Seattle study group is formally affiliated with the Kokusai Shakuhachi Kenshukan (International Shakuhachi Training Center) in Tokyo, in the Koten Honkyoku lineage of Yokoyama Katsuya and Watazumi Doso Roshi.