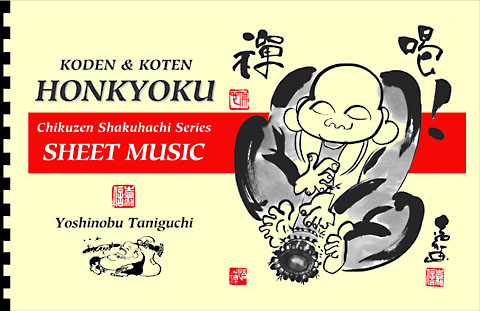 He has received several honors for his work in Japan including acknowledgement as top performer at the Osaka Geijutsu Sai. He was also given the honorary title of Sen Shin Kutsu Dai Shihan at the young age of 32, a title usually reserved for senior "ambassadors" of shakuhachi.

Mr. Taniguchi was Visiting Professor of Shakuhachi at Oberlin College Conservatory of Music in Oberlin, Ohio where he taught in 1982. He presently resides in Mineyama-cho, a small city near the Sea of Japan outside of Kyoto. Despite widespread recognition as a master of the shakuhachi, Mr. Taniguchi shuns the spotlight, preferring to focus on his personal training and preparations for a few select performances each year.

The origins of shakuhachi are rooted in an oral tradition. For generations, honkyoku were passed on from teacher to student without the aid of written notation. Indeed, there is much subtlety and nuance in this musical form impossible to note on a piece of paper. Today, however, and since the advent of a formal notation system by Kurosawa Kinko in the 18th century, most teachers rely on the use of written scores as a fundamental aid in transmitting this ancient musical heritage. The sheet music scores presented in this book - handwritten by Yoshinobu Taniguchi - have been chosen with this in mind. Taniguchi-sensei not only knows the music inside and out, having studied with great masters of the shakuhachi in Japan, but is a talented sumi-e artist and calligrapher as well. His concise style of notation goes far to facilitate interpretation of the traditional music and assist in the learning process. 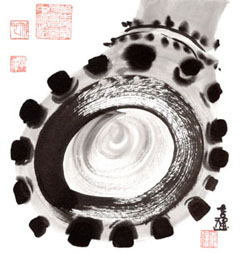 While some of these scores were written years ago, most have been updated recently in an effort to improve on previous versions. The majority of the pieces presented here are dokyoku or honkyoku transmitted through the legendary shakuhachi player Watazumido to Yokoyama Katsuya and then to Taniguchi-sensei. Watazumido was a strong personality who brought his genius to shakuhachi at a time when it was greatly needed. He revived the shakuhachi world by re-introducing high-level techniques and by putting an emphasis on playing "naturally" or freely from one's heart and soul.

Included in this edition are pieces that appear on the four CD set Chikuzen Shakuhachi Series: Ajikan (Vol. 1), Bosatsu (Vol. 2), Sokkan (Vol. 3) and Tamuke (Vol. 4), performed by Taniguchi-sensei. While this collection of musical scores is entitled Koden & Koten Honkyoku, this is not strictly the case. The accompanying CD's contain two modern compositions as well as a sankyoku piece performed in ensemble with koto. These contemporary compositions—Ichi Jo by Kineya Seihoi and Kaze no Uta by Tadao Sawai—are played by Taniguchi-sensi in the style and spirit of shakuhachi honkyoku and, thus, have been included in this edition.

Along with the shakuhachi honkyoku sheet music, this volume also features "The Core Spirit of Shakuhachi " by Yoshinobu Taniguchi, "An Introduction to Taniguchi-sensei" and Glossary by Michael Chikuzen Gould, and three sokyoku pieces prefaced by an introduction to this music.

Chikuzen Shakuhachi Series CDs
This 4 CD set by Yoshinobu Taniguchi include all of the pieces in the accompanying book of sheet music.
Listed below are the compositions in each volume and the length of shakuhachi used.
Free Downloads

What people are saying about the Taniguchi CDs and Sheet Music