Tai Hei Shakuhachi is the originatorof the Precision Cast Bore technology nearly a decade ago. Thismethod of construction has revolutionized flute making processand craftsmen around the world, including Japan, have attemptedto copy this special technique with mixed results. Most of thesemakers use simple forms for casting or hire industrial machineshops to produced lathe turned mandrels. Tai Hei Shakuhachinot only makes all of its master forms, but has helped to inventand build the device with produces these precision mandrels.An innovative laser tracker, co-developed by Monty Levenson andBaroque flute maker Rod Cameron, (only two in the world exist)guides cutting of the forms at incredibly high resolution comparableonly to an expensive computer driven lathe. 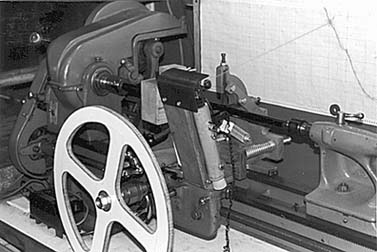 Research and development is an importantpart of the flute making process. Mandrels are continually updatedand improved to take advantage of the data derived from studiesin woodwind acoustics and insights into the physics of the shakuhachibore that have come out of my direct experience.

I recently trained a maker of traditionalshakuhachi in Japan, who has been making instruments for over25 years, in the precision cast bore process. Tai Hei Shakuhachiare now being made in collaboration with this maker, along withJohn Kaizan Neptune, oneof the most highly-regarded players of the instrument, to produceflutes being used by professional musicians and traditional teachersall over Japan.

The initial aim of the precision castbore technology had been to provide decent sounding, finely tunedinstruments at an affordable price for folks who were interestedin starting out on the shakuhachi. The spiraling cost of importedflutes during the 1970's and '80's, along with their propensityto split in the diverse climates of North America, discouragedmusic stores from stocking shakuhachi and people from trying themout. For many years, the standard for beginning students of thetraditional music had been a simulated lathe-turned wooden shakuhachimade with an unrefined bore. The first cast bore shakuhachi weremade during the Winter of 1987. Little did I know that withina few years these instruments would not only replace the woodenvariety, but be chosen by traditional teachers and professionalshakuhachi players around the world as their own personal instruments.Within a short period of time, Tai Hei Shakuhachi emerged as analternative that was both higher in quality and lower in pricethan instruments imported from Japan. 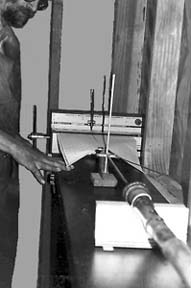 Electronicbore measurer invented by baroque flutemaer Rod Cameron, providesparameters of the flute accurate to .01mm. A computer interfacefor this device was developed by Rod, Monty and Darrel Dean.

At the heart of this development isthe precision cast bore© technique which has the abilityto reproduce -- with near perfection -- the bore dimensions ofhistorical flutes and modern instruments of the finest quality.Access to these shakuhachi have been provided to me by some ofthe leading makers, teachers and players in Japan today. The interiorof these "gauge" flutes are very carefully measuredand analyzed in an intricate process which renders the profileof the bore into an enlarged graphic format. A finished graphcharts the bore in two stages -- initially at 25 times, then toover 50 times its actual size --  and can be clearly readto within .01 mm (.0025"). This degree of accuracy is criticalas subtle variations in the bore of the flute can make a dramaticdifference in the instrument's resonance and tonal quality. Workingfrom a "gauge" flute is similar in approach to the waythat traditional makers in Japan create their instruments. TaiHei Shakuhachi's precision casting method, however, significantlyreduces the time it takes to fabricate the interior of the flute.More importantly, it provides a degree of precision and repeatabilityimpossible to achieve in traditional attempts at duplication.These differences are ultimately reflected in performance as wellas in the price of the finished product. Extreme accuracy in boreduplication enables Tai Hei Shakuhachi to improve continuallyover time as enhancements in bore design are maintained throughsuccessive generations of instruments produced. The process ofrefinement is cumulative.

Measurement, casting and techniques of reproduction are just partof the process involved in making a well-playing shakuhachi. Qualityinstruments cannot be mass-produced as the shakuhachi, by itsnature, defies standardization. Since each piece of bamboo isunique -- differing from the "gauge" flute in size,shape and diameter -- very fine adjustments must be made in thebore to establish balance and resonant frequencies for each ofthe notes. Building upon the work of John Kaizan Neptune, a leadingplayer, composer and flutemaker in Japan who has engaged in apioneering effort to map the acoustical parameters of the shakuhachi,I am working toward developing a better understanding of how minusculechanges in bore profile affect timbre, balance and subtle harmonicvariations in the sound produced by this instrument.