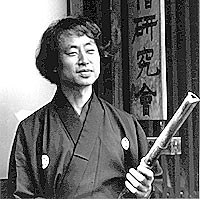 Tokuyama has studied with several senior shakuhachi masters, but aligns himself with no particular school. His recordings are entirely from the ancient traditional Japanese shakuhachi masterworks collection, the Koten honkyoku.

In Tokyo, sensei Tokuyama leads a school for the study of traditional shakuhachi, the Honkyoku Study Group. Nowadays in Japan there are few people keeping this ancient musical tradition alive.

Tokuyama received a degree in shakuhachi performance from Tokyo Fine Arts University, a course of study he completed after already having received a degree from Keio University in philosophy and art. After graduation, Tokuyama went to Europe and India, where he studied and practiced the music and instruments of those regions. He has succeeded in learning to play dozens of instruments.

In April 1986, Tokuyama made his first visit to America, where he gave concerts and masters classes in California. He visited San Francisco, Marin, Berkeley, Sacramento, Willits, Garberville and Chico.