Shirley Kazuyo Muramoto, a native of Oakland, California, continues a long tradition of Japanese koto music in America. This tradition began when her mother was encouraged to learn the koto as a young girl in the American relocation camps of World War II. Given a koto with no strings, Muramoto's grandfather, Yasuki Hori, fashioned strings by tying reeds together. He made ji (tuning bridges) by carving wood scraps and toothbrush handles. Yasuki learned the shakuhachi (bamboo flute) to play songs with his two daughters and encouraged their practicing. From childhood, Muramoto was fortunate to receive training on various styles of koto music from such masters as Kazue Kudo, Tomoko Sunazaki, Yoko Gates and from her mother, Madame Kazuko Muramoto.

In 1976, Muramoto received her Shihan degree (Instructor's license) with Yushusho (highest ranking honors) at the Chikushi School in Fukuoka, Japan. Her ability to perform on the koto from traditional to contemporary to jazz gives her the distinction of being one of the few koto musicians to be able to perform in a variety of styles. She has performed at various universities, concerts and events in the U.S., Canada and Japan, including performances with cinematic composer Maurice Jarre, the Sacramento Symphony, the Marin Symphony and with shakuhachi master John Kaizan Neptune. Muramoto has performed for dignitaries such as San Francisco Mayor Willie Brown, former Secretary of State George Schultz, Vice President Al Gore and Mikhael Gorbachev.

Muramoto is the director of The Murasaki Ensemble, a chamber jazz group that incorporates koto with Middle Eastern percussion, flute, guitar and bass. " I have a strong desire to keep the legacy of the koto alive in America and perhaps in Japan as well," says Muramoto. "It's an irony that it's becoming rare in its place of origin due to changing attitudes and changing ways. The koto is not only versatile but a highly adaptive musical instrument -- only continuing its study will keep the art alive." 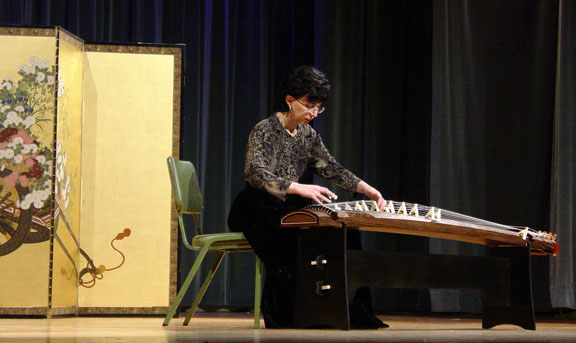 Performer and teacher, Linda Kako Caplan is one of Canada's premier koto and shamisen artists. She holds the rarely-conferred and prestigious rank of Dai Shihan (Grandmaster) from the Chikushikai Koto School in Fukuoka, Japan. Caplan is the sole Canadian in the school's nearly seventy year history to be granted this rank, and the only North American koto player of non-Japanese descent to attain this level.

As soloist and ensemble member, Caplan has performed for over two decades at many events in Canada, Japan and the United States. She has also performed at private and diplomatic functions whose hosts and honoured guests have included Their Royal Highnesses Princess and the late Prince Takamado of Japan, Yukiko Sugihara (wife of the late Japanese Consul Chiune Sugihara), Ontario Premier David Peterson, Toronto Mayor Art Eggleton, and Japanese Ambassador to Canada Kiyoaki Kikuchi. Caplan is the Japanese Music Course Director at York University in Toronto, Canada. In addition, she teaches koto and shamisen at her private studio and also as a volunteer at the Japanese Canadian Cultural Centre.

Dr. Elizabeth Falconer began koto studies in 1979, and has a masters license from the Sawai Koto School in Japan. After twelve years of studies under koto masters Nagane Utayumi, Sawai Tadao, and Sawai Kazue, she returned to the US to teach and perform. Her work includes her award-winning "Koto Tales," a blending of music and stories as well as contemporary, classical and improvisational performances. 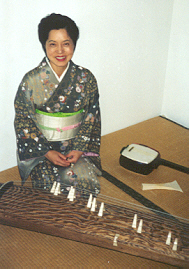 Yoko Hiraoka passes on the mantle of mastership through her school, the Koto Music Institute of Colorado. Since 1981 her teaching and playing have found venues in both Japan and the USA. She performs extensively in both countries at festivals, concerts, lectures-recitals, and in television and studio recordings. She has been a member of Kyoto Hogaku Group (an orchestra of traditional Japanese instruments) and Kyoto Sankyoku-kai in Japan. She also plays with the Kyoto-based Shikandaza Ensemble. 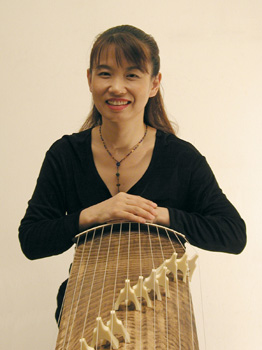 Masayo Ishigure began playing the koto and jiuta shamisen at the age of five in Gifu, Japan. After initial studies with Tadao and Kazue Sawai, she became a special research student in 1986 at the Sawai Koto Academy of Music. The aim of the academy was to shed new light on koto music by incorporating everything from Bach to jazz and thus change the koto from being thought of only as a traditional Japanese instrument into an instrument of universal expressiveness. Later Masayo Ishigure became one of a small group of virtuoso disciples of the Sawais and successfully completed the 33rd Ikusei-kai program sponsored by NHK to foster and train aspiring artists in Japanese music. In 1988 Ms. Ishigure received a degree in Japanese Traditional Music at Takasaki Junior Arts College with a concentration in koto and shamisen. The same year she was recorded on the CD entitled The World of Tadao Sawai. In 1994 she appeared on the CD entitled Tori no Yoni: Tadao Sawai Compositions. Since that time she has performed all over the world, and appeared in such festivals as Bang on a Can (NYC). In 1992 Ms. Ishigure began teaching koto and shamisen in the music department of Wesleyan University (CT) as an artist in residence where she formed the Wesleyan Koto Ensemble. She also offers private lessons as the only Sawai Koto Academy instructor in the New York metropolitan area.

A virtuoso koto, piano and vocal artist, Michiyo Koga has been playing koto since childhood. She has also received formal instructions in piano since she was 5, as well as voice since the age of 15. She received her Ikuta Koto Teacher,s License in 1970, and graduated from the NHK Japanese Ensemble Course in 1977. In 1978 she received her Bachelor,s Degree in Music from Senzoku Gakuen University in Tokyo. She has performed and recorded many times in Japan, Germany and the United States, working with many artists and ensembles including the great concert violinist, Isaac Stern. She is presently the principle Koto instructor for the Japanese Music Institute of America. She has also been selected as 1998-2000 Touring Artists Directory by the California Arts Council with Masayuki Koga.

Reiko Obata, a California native, studied koto under masters in both the U.S. and Japan, including celebrated composer virtuoso Shinichi Yuize. She obtained her Japanese mast ers degree (shihan) in koto from the Seiha School of Japanese Music and her master's degree in music from San Diego State University. Obata performs in a variety of styles from traditional to jazz,
and has performed with jazz saxophonist Hollis Gentry, guitarist Fred Benedetti, shakuhachi composer John Kaizan Neptune, Fattburger's drummer Kevin Koch, as well as San Diego Symphony cellist Mary Oda Szanto and Symphony percussionist Jonathan Szanto. She has performed for radio, film, and live theatre and has recorded her own compositions and arrangements on two CDs. Obata is a faculty member of the Music Department of San Diego Mesa College.

Born in Shizuoka Prefecture, Kazuyuki Shiotaka started his musical carrier as a professional guitar player. He began studying composition with Hiromi Ishii, and Biwa with Yukio Tanaka, in order to further develop his music; the latter a step that brought him in touch with the traditional Japanese music. As a performing artist he is now completely devoted to the Biwa, and performs his own compositions as well as the traditional Biwa repertoire, crossing over the boarders of genres. In 2001 he formed the duo "Panta Rei" with Shakuhachi performer Gunnar Jinmei Linder, and he is also collaborating with other artists, such as with Keiki Midorikawa (cello) and Kazuo Yoshida (flute), and has performed with Sanzaemon Takara (designated National Treasure). Mr. Shiotaka performs in a wide field of genres at various types of venues, such as live houses, rock.

The son of Shirley Kazuyo Muramoto Wong, and grandson of Kazuko Muramoto, Brian carries on the family legacy of being a teacher of the koto in America that spans three generations.  Brian‚s grandmother, Kazuko Muramoto, holder of the Tobiume degree, the highest koto level awarded of the Chikushi Kai Koto School, has taught koto in the Bay Area for over 50 years.

Brian has been studying koto since the age of 4, when his mother began teaching him how to play the instrument.  "I taught koto to both my sons, so they would have some knowledge about what I do. I never imagined either would be interested in seriously pursuing the study of the koto. I'm completely surprised and elated that Brian has studied and achieved this amazing feat, boasts Shirley. As a senior attending Cal State East Bay at Hayward, majoring in music composition, Brian composed works for mixed Western instrumentations as well as specific koto pieces. In addition, Brian is an accomplished jazz saxophonist. At the age of 21, Brian is already making a name for himself in the Bay Area‚s musical community. He has assisted his mother teaching koto classes at UC Berkeley, and introduced new compositions by himself and others at UC Berkeley and California State University at Hayward. Additionally, Brian has performed numerous times at Yoshi's Jazz Club in Oakland as a featured artist with the Murasaki Ensemble, with the CSEBH jazz ensembles, and also with the Oaktown Jazz Workshop with special guest Pete Escovedo. He gave his first solo koto concert as part of the Young Musicians Concert Series at the Community School for Music and Arts in Mountain View in 2005, and has performed in concert with koto masters Kazue Sawai and Hikaru Sawai of the Sawai Soukyokuin Koto Conservatory in Japan. A future goal of Brian‚s is to form his own jazz trio. He also desires to work with other musicians, dancers and artists in diverse collaborations.

Koto no Koto is a new website about the koto which is designed not only to educate people about the instrument, but also to bring players together. Designed and maintained by Scott Robertson, the site contains many resources, including performance schedules, recordings, and a message board. It also includes sources for koto supplies, music, instruction and other resources too numerous to mention.
Kayoko Wakita, KOTO MANUAL: Ikuta Style
Koto Recordings