TAKAHASHI RYUDO is not a professional musician, but a businessman who divides his time between his livelihood and passion for shakuhachi. He studied and received his master's license in Kinko-ryu shakuhachi from Tanaka Judo in 1970. He now presides over his own school, the Ryudo-Kai in Yamagata and is head mentor of the Garyu-Kai, a society formed to preserve the Fuke (Komuso) shakuhachi tradition.Takahashi learned the entire Fuke repertoire under renowned teacher Uramoto Sekicho and has also studied with Yokoyama Katsuya. 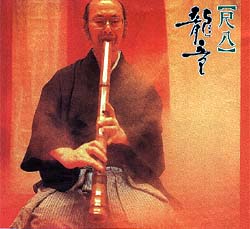