I recently received a message from my shakuhachi teacher Bob Grous who asked if I knew Bill Shozan Schultz as his name was listed as "shakuhachi soloist" on the credits of the movie Snow Falling on Cedars. I've known of Bill for years and had the pleasure of meeting him personally for the first time at the World Shakuhachi Festival in Boulder, CO back in 1998.. Bill lived in Japan for nine years studying Shakuhachi under the renowned Tozan master Koyama Seizan. He received his Shihan certificate in 1993 and since that time has been teaching in Los Angeles, both privately and in the Ethnomusicology Department at UCLA. I wrote to Bill and asked if he would like to share some insights and experiences in working on this Hollywood project. Here is his response.

Even though the film Snow Falling on Cedars had its nationwide release in January of this year, my involvement with the project began with a telephone call in October of 1997 and ended in a recording studio in September of 1998.  Along the way I was privileged to get a peak into the world of "Hollywood" while being allowed to work with some of its best and brightest people.

I've been spending these last few days thinking about my experiences with Hollywood and to help clarify the events in my own mind I began by writing a brief time-line of my involvement with the project. 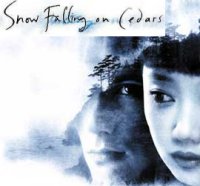 First spoke with Jodi Zuckerman, assistant to Scott Hicks.  Jodi explained that Scott was looking for a Shakuhachi player to teach the star of the movie, Kudoh Youki, how to "play" the instrument for a scene in the movie.  She told me about the project, "Snow Falling on Cedars," and about the background research that she was conducting for the film. From our first conversation she realized that I was a good resource for information about anything Japanese and she often called me with detailed questions about Japanese customs and attitudes. Several conversations later Jodi had me meet with the director, Scott Hicks, for the first time.  When I met Scott he told me about his vision for the film, particularly his desire for an accurate portrayal of the Japanese, and his love of the Shakuhachi.  I was impressed by the creative intensity of his vision and by his concern for accurate detail.  He gave me a copy of the script to familiarize myself with the story and asked that I comment on the accuracy of how the Japanese were portrayed and about his desire to have the main character, a woman, play Shakuhachi in a scene.  Later, after studying the script, I told him that it would be very unlikely that the main woman character would have played Shakuhachi and the scene was never done.

During this first meeting with Mr. Hicks I played some Honkyoku for him and he said that he definitely wanted to have the Shakuhachi sound in his film.  We ended our meeting with him telling me that he would have his composer, James Newton Howard, give me a call.

I spent hours reading and rereading the script, I read the book by David Guterson from which the script was based, and I had several more conversations with Jodi.  With Jodi I discussed the many minor discrepancies and unlikely Japanese things that I found.  For example, as taken from the book the script named a main character by the unlikely name "Kabuo" which I encouraged then to change to "Kazuo".

The movie was filmed in Canada (after all, snow falling on some cedars was needed) and at the Sony lot in Los Angeles.

Finally got the call from the composer, James Newton Howard, and we met for dinner to discuss Japanese music, the Shakuhachi, and the musical mindset for this film.  We talked about the possibility of me playing Shakuhachi for the film but he wasn't sure of his musical direction yet.

Spoke with James regularly, did some ethnomusicology research for him because he had some ideas as well as sounds in his head that he wanted to identify and possibly use. Finally, he had me in the recording studio for some sound sampling and the recording of some ideas.
Sound sampling is a process of first recording various musical scales and other sounds that are particular to the Shakuhachi, then digitizing this information, then feeding these sounds into a keyboard.  This then allowed James to compose some music on his keyboard while actually hearing the various Shakuhachi sounds that I recorded.  He would then rough out some of his compositions in this way and then later have them recorded by his various musicians as a seamless piece of music.

After viewing several cuts of various movie scenes and practicing some musical themes and improvisations arranged by James I went to the Todd AO scoring stage.  Todd AO is an impressive place.  This studio is a cavernous building with a large movie screen on one wall, a control booth that looks like it belongs at NASA, and perfect acoustics.  As the scene that you are recording for is projected onto the full size movie screen you wait for your queues, different colored lines that appear on the screen, and then you play.  In my case, I learned the main scene that I was doing by the dialogue because I didn't want to be distracted by the visual.  I listened with headphones, eyes closed, and played my part for recording.  For another scene, I worked the conventional way by watching the screen while playing and stopping by the colored line queues. Some improvisational phrases were also recorded at Todd AO.

Final editing and mixing and the film is completed. However, its proposed release is held back by the studio, Universal Pictures, because they liked the film so much that they decided to wait for better positioning. Needless to say, as anxious as I was to hear the music in the final cut I would have to wait.

After a year long wait the movie finally premiered in Los Angeles and in New York.

In retrospect, working on the film was an amazing experience.  James Newton Howard in particular was a pleasure to work with.  He was very sensitive to my reverence for the Shakuhachi and its body of music and was apologetic for the parameters placed on the instrument by the requirements of Hollywood.  He often told me how much in enjoyed my playing, how relaxed and meditative it made him feel, when he first heard me play at his studio.  It was then, that first day in his studio, that he decided that I would be playing in the film.  A main musical consideration for this movie was the conscious choice by the director to play down the ethnic separation of the Japanese that could have been exacerbated by using alot of Japanese sounding music.  The director wanted to heighten the outrage of the audience over the injustice of forcing the Japanese into camps.  In order to do this he couldn't have the audience feeling that the Japanese thought of themselves as anything other than loyal americans.  Therefore, in one scene at the camp for example, the Japanese are listening to the popular music of the time and not to traditional Hogaku. The point being that these Japanese-Americans were as american as any other of our next door neighbors and should not have been treated as an enemy.

The first rule in movies is that the scene drive the film, not the music. Music is an adder, for mood, for tension, for identifying a character, or whatever.  The music follows the visual.  The music is lead by the visual.

In conclusion I would like to add some random thoughts about the intersection of Hollywood and Shakuhachi.

It is my personal belief that there are two Shakuhachi's.  One Shakuhachi is actually an attitude which comprises a  body of work, Japanese music and in particular Honkyoku, and the other Shakuhachi is merely an instrument. (Like a piano is an instrument.  Though some would contend that original piano music is classical, others, who have heard Otis Spann play, would swear that the Blues was the original piano music and thus responsible for the "piano sound."  With the Shakuhachi there is currently no confusion about its original music or where its "sound" came from).

In the hands of a master the instrument Shakuhachi can be made to range from  the subtleties of Jazz and Indian Ragas to the digital sounds of orchestral pieces and the sounds of pop culture  But the Shakuhachi-ness is usually lost or dulled when the Shakuhachi is played as an instrument.  It seems apparent that the Shakuhachi is evolving into an instrument and eventually it will be more accepted in non traditional contexts.  It seems that the typical pattern is that someone hears some beautiful Honkyoku and they then become enamored by the subtle beauty of the Shakuhachi and then the listener starts imagining that same Shakuhachi feeling in a different context, a sonata for example.  Film composers are listeners too and they, among others, are desirous to capture the Shakuhachi-ness of the instrument they heard and to somehow retain this sound or feeling in their score.  But they are somewhat restricted by current convention and are therefore reluctant to let too much Shakuhachi-ness out of the bottle.  Do not forget rule number one.  Movies are visual and people don't go to the movies to listen to the music.

As a Shakuhachi player and a student of Japan and her people, my relationship with Hollywood for this film was a bit unusual.  If I were only a musician my experience would have been totally different.  I am aware of this and am grateful that the combination of my cultural knowledge of Japan and my Shakuhachi playing allowed me the chance to get a glimpse of Hollywood.

For those of you who are wondering which door to knock on or just where you must stand in order to be noticed in the intersection of Hollywood and Shakuhachi my only advice is to be in the right place at the right time.

Order the Soundtrack to Snow Falling on Cedars